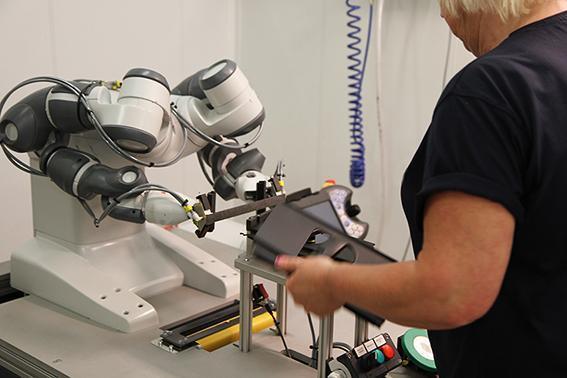 Posted at 09:16h in news by Christina Olausson

In yet another step in the development of its production unit in Örkelljunga, KB Components is welcoming a new employee – a two-armed robot that can perform repetitive tasks together with a real person.

KB Components has always been at the forefront when it comes to using new technology. Now, the company is taking yet another step in the automation of assembly tasks that require interaction between employees and robots to ensure the right quality. The unit in Örkelljunga is one of Europe’s most modern production facilities for injection-moulded plastic components and has extensive experience in advanced robot technology as part of the production process. The collaborative robot (also known as a cobot) takes human-robot cooperation to an all-new level. Never before have we humans and robots had the opportunity to work so closely together. The new employee doesn’t require any safety zones like a traditional robot would, but is instead fitted with sensors that automatically slow down its movements and freeze the robot if anything approaches.

The cobot is strikingly similar to a human, with arms, wrists and human dimensions and movements. It is specifically designed to work with small parts side by side with its human colleague, without separating fences or barriers. This is a part of the automation that was previously not so advanced.

–Its human movements make it feel totally natural to be its co-worker. It senses when I put parts there and then finishes their assembly. It even ‘shrinks back’ if I get close to its arm, says Pernilla Knutsson, who works daily with the cobot.

The robot has a tireless ability to perform precise, repetitive tasks, making it possible to automate processes that involve a physical flow of material, to manufacture finished goods and to eliminate repetitive assembly work that leads to strain injuries.


This site uses cookies to improve the experience for you. Read more.